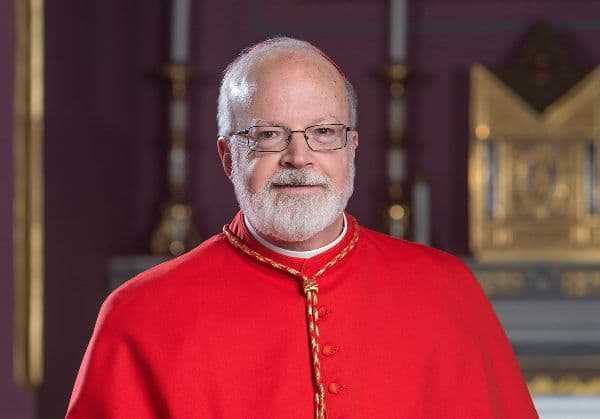 Cardinal Seán Patrick O’Malley, OFM Cap. is the ninth bishop and sixth archbishop in the more than 200 year history of the Archdiocese of Boston.

He was born in Lakewood, Ohio, June 29, 1944, son of the late Theodore and Mary Louise (Reidy) O’Malley. He attended St. Gabriel and Sacred Heart Elementary Schools in Pennsylvania and St. Fidelis High School, a high school seminary conducted by the Capuchin fathers, in Butler, Pa:

On Aug. 29, 1970, Pittsburgh’s Auxiliary Bishop John B. McDowell ordained him a priest of the Order of Friars Minor Capuchin. He then went on to earn a master’s degree in religious education and a doctorate in Spanish and Portuguese Literature, both at the Catholic University of America in Washington, D.C., where he also taught from 1969 to 1973.

In 1973 he began serving as Executive Director of El Centro Catolico Hispano in the Washington Archdiocese before being named Episcopal Vicar for the Hispanic, Portuguese and Haitian communities and executive director of the archdiocesan Office of Social Ministry in 1978. It was during these early days of his priesthood that Cardinal O’Malley developed a strong commitment to the issues of social justice and care for new immigrants.

Pope John Paul II appointed him as coadjutor bishop of the Diocese of St. Thomas in the Virgin Islands on May 30, 1984. The Most Rev. Edward J. Harper, CSSR, the bishop of St. Thomas assisted by Washington’s Archbishop James A. Hickey and one of the capital city’s auxiliary bishops, Bishop Eugene Marino, SSJ, ordained him a bishop on Aug. 2, 1984 at the Cathedral of Sts. Peter and Paul in St. Thomas, V.I. He became the diocesan bishop of the Caribbean diocese, succeeding Bishop Harper, on Oct. 16, 1985

On June 16, 1992 Pope John Paul II announced the appointment of Bishop O’Malley as the sixth bishop of Fall River.

During his 10 years in Fall River, he was involved with the wider community both within the diocese itself and in the Commonwealth. He was active in the work of the Massachusetts Catholic Conference, especially on pro-life issues.

While Bishop of Fall River, he was appointed by Pope John Paul II to the Special Assembly for Oceania of the Synod of Bishops, which was held at the Vatican in the fall of 1998. He has also served as Apostolic Visitator for several seminaries in Central America and the Caribbean.

On Sept. 3, 2002, Pope John Paul II named him to be the fourth Bishop of the Diocese of Palm Beach, Fla., which had seen its previous bishop resign six months earlier after admitting to abuse of minors. He was installed at the Cathedral of St. Ignatius Loyola in Palm Beach Gardens on Oct. 19, 2002. After less than a year in Palm Beach, on July 1, 2003, Pope John Paul II appointed him the Archbishop of Boston.

During a trip to Rome to take formal possession of his titular church in September 2006, Cardinal O’Malley became the first cardinal in the world to launch a personal blog, cardinalseansblog.org, which he continues to update weekly.

In the late 2000’s, with the immediate effects of the clergy abuse crisis in Boston largely passed, Cardinal O’Malley turned his attention to the long-term spiritual and fiscal health of the archdiocese. He implemented plans to conserve parish resources, launched the Campaign for Catholic Schools aimed at strengthening and expanding the existing schools, and stabilized the archdiocese’s lay-employee and clergy pension systems as well as the clergy health and retirement funds.

He has also put a great emphasis on vocations and outreach of the Church to youth, including expanding the archdiocese’s use of the Internet and social media and encouraging participation in pilgrimages to the International World Youth Days and the annual March for Life in Washington, D.C.

Shortly after Pope Francis’s March 2013 election, the Holy Father selected Cardinal O’Malley to be the only North American member of his council of cardinals — commonly called the “group of nine” or simply the “G9” — who advise the Holy Father on the restructuring of the Roman Curia. Pope Francis has also asked him to lead the Vatican’s Pontifical Commission for the Protection of Minors, which held its first meeting in May 2014.

Throughout his years as bishop, Cardinal O’Malley has served on numerous other commissions and committees, including Missions (of which he was chairman), Priestly Formation, Hispanic Affairs, Migration, as well as serving on the board of directors for Catholic Relief Services, the Association for the Development of the Catholic University of Portugal and on the board of trustees of his alma mater, The Catholic University of America in Washington, D.C.